The global gas generator group has entered a mature stage ten years ago, and the growth rate of the future market is expected to slow down, but considering the policies of some regions and future technology innovations, this market prospect is still optimistic. According to Froster Shari, the worldGas generatorThe group market income has grown by about 20% in 2012, and it is expected to reach a size of about $ 8.6 billion in 2019, the annual compound growth rate of about 14% will be maintained.

Most of the 300kW ~ 1MW gas generator sets are mainly used in industrial and thermoelectric combined applications. The Fressis Sharid report shows that the number of gas engines below 60KW, accounting for about two-thirds of the number of market parts, less than 15% of 300kW ~ 1MW. However, from income contribution, the gas engine group of 300kW ~ 1MW power is becoming more important, as shown in the following figure, its contribution to the entire market income is expected to reach around 35% in 2019. 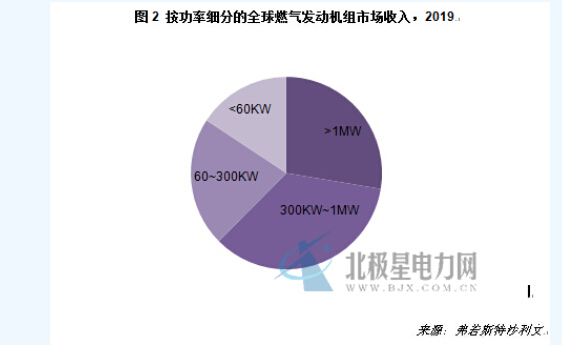 Opportunity. Reducing the emissions of carbon dioxide is increasingly consensus, in some developed countries and regions, such as North America and the European Union, national policies set in order to meet the emission standards have been well developed. One of the most important methods of reducing carbon dioxide emissions is the electricity generated by high efficiency cleaning, and then the terminal consumers use these electricity. This will promote the sales of gas generator sets.
Some specific applications of gas generator sets will also face growth. Some special gases, such as biogas and landfills, although now only account for only a small part of the gas generator set, these areas are steadily growing, and new opportunities for market access, especially in Europe, etc. .
Market constraint factor analysis
First, higher operations and maintenance costs limit the growth of the market. One major factor that hinders the development of gas generator sets is that technology development is still not enough, resulting in average cost of gas generator sets. Although the competitive pattern of the gas generator sets is expected to be improved during the forecast period,Gas generatorThe group is still 50% more than their competitors diesel engine. Despite this, it is worth mentioning that the terminal user of the gas generator set has begun to realize that they can save some costs from the repair and begin to pay attention to the overall cost of the equipment life.
Second, the infrastructure has limited the development of gas generator sets. The market size of the gas generator set is inherently inherently, how many gas can be used closely. Most regions, especially emerging economies, there is no sufficient ability to develop these gas, and lacking inevitable infrastructure will transport gas into other regions to local, for example in India, gas infrastructure levels. The construction of starting transportation pipes can significantly reduce the country's large-scale energy crisis. Franos Tibetu expects this factor in a short period of impact on the growth of the entire market.
Competition from gas turbines and other renewable energy will also limit the adoption rate of gas generator sets. One major factor in limiting the gas generator is that they can be replaced by a gas turbine. Moreover, the terminal consumers may choose a gas turbine instead of a gas generator, because the gas turbine better meets the requirements of end consumers, especially in some high power output requirements.